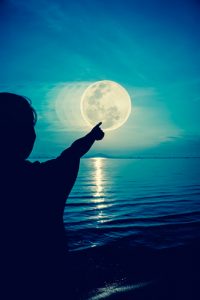 As far as I can tell there is only one truth. The one truth is that all meaning is made up. Religious ideas, political ideas, psychological models—all made up. Our brains are meaning making machines. Put an image in front of me and I’ll make meaning of it. I’ll interpret it based on what I already know.

And when something happens that is unlike anything I’ve ever encountered before, I’ll stump myself. I’ll be at a momentary loss until I can categorize, label, identify—all of which are ways of making meaning.

Recently, working with my clients, I’ve been shining a brighter light on this idea that meaning is made up. And I impress and excite myself as I witness people freeing themselves of so much mental clutter.

The most typical response that I hear is:

Let’s say that your partner lied to you about something, but he comes forward a week later and admits he lied. You can look at this as a disaster, realizing that if your partner is willing to lie to you about one thing, maybe he’ll lie to you about other things. And worst of all, even if you ask him if he’s lying to you, you can’t believe his answer because he’s lied to you before. This is a real mess and potentially something that you never recover from. Suspicion grows and trust is never reestablished.

Or . . . you might realize that your partner coming forward and telling you he lied is a remarkable opening on his part. He is actually taking responsibility for his inappropriate behavior. This could be the turning point in the relationship. This could be a chance to relate in a more genuine way and by appreciating his honesty you reinforce his new behavior. You stay in the moment, the moment in which he is being honest and revealing and you choose not to punish him for having lied to you.

What’s the difference in these two stories. Which one is the truth? The one truth? Neither of them. They’re both made up. So, yes, you can change the meaning of any event that happens in your life. And this is probably the place to begin practicing. If you disturb yourself with some meaning you make, change the meaning and see what happens. Just try it . . .

One specific way to change the meaning in human interactions is to look through the eyes of the other person. Listen to them and believe them. Just this simple act is likely to help you create new meaning. It’s a powerful technique that I use with my wife, Hannah. Whatever she tells me, I believe her. After all, she’s a very honest person, so why argue? Why not stop and allow myself to experience events through her eyes? This is a great way to recognize the malleability of meaning.

Then, the next step—and this is the one that I find so extraordinary—doesn’t  require me to change the meaning, simply to recognize that the meaning I’m making is made up.

It’s all made up.

We each make up meaning of everything that happens all day long. Even if we understand this idea on some intellectual level, the chances are that we don’t live with this knowledge in the forefront of our minds. What would happen if we did?

I can tell you what’s happening for me as I live this way. Then you can try it for yourself and see what happens for you.

As I fully recognize that all meaning is made up I deeply relax myself and become present. I experience non-attachment. After all, why be attached to stuff when you realize it’s entirely made up?

I am living more and more in the space that exists between the stimulus and my response. This is one of my favorite quotes:

Between the stimulus and the response there’s a space, and in that space is our power and our freedom.

Victor Frankl, author of Man’s Search For Meaning said that. And I think it is the most helpful idea I’ve ever heard—but remember, even it’s made up.

Some ways of making meaning are healthier than others.

Finally, I want to reiterate my other key point, which for me is even more freeing. Sometimes I don’t need to change the meaning that I’m making, only to realize that the meaning I make is made up. That’s the real source of leverage. Whatever I’m thinking that is causing me to suffer—it’s based on some story I’m telling myself.

When I realize that the story—the meaning I’ve assigned to something is made up—I can more easily let it go. So if I’m driving myself crazy with some compulsive thought, or if I’m triggering myself with some story, as soon as I remember that what I’m telling myself is made up—I let go. In a previous article I refer to this as Poofing!

And, I want to be clear that “letting go” is not the same as repressing. I’ll explain the difference between “letting go” and repressing in part II of this article.

This approach that I’m sharing with you is very effective if you want to experience balance and tranquility. If you’re a person who loves the highs, maybe you even enjoy the emotional roller coaster ride, letting go and non-attachment may not appeal to you. Is tranquility better than emotional drama? That all depends on how you make up meaning.

Live Conscious offers me many pearls, but two that I find most useful are:

If you found value in this blog post and you’d like to read some of our previously written articles . . . just fill out the form below and we’ll email you the articles right away.

Living in a state of presence
How to Reduce Inner Conflict

24 Responses to The One Truth