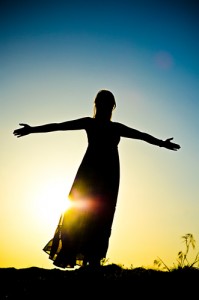 Do you want to be happy?

All of this is possible—the key is learning to do two things. Not “learning two things,” but “learning TO DO two things.” Both of which I wish I had learned a long time ago because when I started doing these two things my life became much easier.

In the past few months I’ve fervently been doing these two things and nothing has ever had a bigger impact upon my well-being and happiness.

First, is to really grasp the idea that all  meaning is made up.

Doing this results in me living in this moment, while understanding that I am making—shaping—this very moment. When I fully grasp this I no longer limit myself based on my history and the stories I’ve told myself. Those stories no longer hold water.

This means that I don’t have to spend endless hours or years trying to figure out why I behave in the ways I behave. Instead, I can ask a simple question, “How do I want to behave right now?”

I’m not saying that self-knowledge isn’t useful. I’m saying that I believe I spent too much time looking inward in ways that weren’t sufficiently productive. And a lot of this has to do with the ways I used to make meaning. By changing the ways I make meaning my self-reflections have become transformative (more on this later).

The second thing TO DO differently

The second thing is to let go of arguing about the past, and instead, talk about what’s happening now, which is easier to do if I accept that meaning is made up, because then I’m less attached—I take myself less seriously.

Let’s explore the idea that meaning is made up.

Meaning is made based on the questions we ask, the shoes we stand in—our own or someone else’s—whether we hold a short or long-term perspective, whether we focus on the past, present or future, and how we make sense of things.

Once we begin making meaning of things in a certain way (let’s say that based on my past relationships I believe that relationships are hard work—that’s the meaning I make), then I will typically go through the rest of my life seeking relationships that reaffirm what I think I know to be “true”—so the beliefs I hold become stronger and more rigid over time.

When we use Perception Language we talk about what’s happening now, right now, in this moment. We often don’t agree on what happened in the past, anyway. Who said what. Who did what. Who used what tone of voice. So, instead, we shift the focus and talk about now—“What can I do now to address this situation.”

When Hannah and I used to experience conflict, I would spend a lot of energy building a case to justify my feelings. Usually this involved going back in time and finding examples to support my case, whatever that might be. She would then go back in time to find counter-examples to whatever I was saying. We both used the past to justify our current behaviors and feelings.

There were two problems with this kind of exchange. The first is that we were no longer in the present and the present is the only place where we can connect.

The second problem is that we were both making up all the stories we were telling each other. We didn’t think we were making them up. We were sincere. We believed we were telling our own personal truths, but really, we were just making stuff up. I call it back filling. I now consider this to be a waste of precious time.

If you want to learn to live in the present and learn ways to make meaning that simplify your life, create ease in your relationships, and allow you to stop being driven by a need to protect yourself—come to our next retreat. Is it the only way to learn this? No, but it’s the quickest. Come, learn to make the most of NOW.

One Response to Make The Most of NOW