By Hannah Eagle on August 1, 2015 in Personal Growth 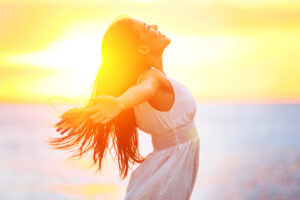 Have you ever wanted to change your name—even for a day? It’s a really interesting thing to do. When people attend our retreats, this is part of the experience. We all choose pseudonyms to use during the retreat, and many people will change their names—their pseudonyms—several times during the week. We use our “chosen” names as a focusing device, in order to focus our consciousness on some issue, desire or state of being that we want to embody.

At our recent retreat I named myself “Power”

I did this to explore the ways in which I hold myself back from being powerful. One example is when I do not say what I need to say.

In my teens, I wasn’t allowed to freely speak my mind. My father and I had radically different political ideas. I learned early on not to “sass back”. But, in my mind, that really meant, “Don’t say anything unless you are agreeing with me. And don’t speak unless spoken to.”

So, later, in my adult life, my “story” about not being allowed to speak freely became an excuse for not speaking my mind. At times I wasn’t even willing to share something I cared deeply about, especially if I thought it was controversial, and definitely not if it involved speaking up in a public forum. I had a knee- jerk unconscious fear that I would be criticized and “in trouble”.

Yes, I experienced my father as a bully when I was in my teens. It wasn’t fair and I created a story, a belief, that it wasn’t safe to speak my mind. That’s how I made meaning of the message from my father. And as I matured, I carried the story and believed it wasn’t safe to speak up even as an adult. This wasn’t true, but this was my story. And I stuck with it far too long.

Then, many years later, I had a big aha!

I began to wonder, “Who would I be without this story?” Did I really want to believe that my past predetermines how I do myself? Did I want to continue to live out that story?

Was I going to be a victim of my past as a way to excuse my current behaviors? No. Could I choose to ‘remake myself’ as Gandhi suggested and be something other than my old story? Yes.

To challenge my old belief and remake myself, I began to decide how I wanted to behave and chose new behaviors that made me feel better about myself. I started sharing what I felt with others, even if I thought they might disagree. I decided that since I was no longer thirteen and the world was not my father, I had permission to consciously speak my mind. And since connecting with Live Conscious, I learned to “redo” myself if I wasn’t pleased with how I said something the first time.

I love taking my power back in this way. I love speaking up and just being me. I realize I don’t know everything nor do I have to be “right.” Other people often have different views but that doesn’t make me wrong, and if I remember to be kind to others when I do speak up, there is nothing to fear.

As I take my power back, I notice many of the things that I used to believe were true, are just stories I made up. Now I ask myself “Is this really true or is this just a story I’m telling myself?” And I begin to see there is no “truth”—and that everything is a projection of my mind.

I’ve adopted a “don’t know mind,”—a state of mind without so many preconceived ideas about everything.

I now realize that I am simply making meaning of everything. All that I believe—all my beliefs and assumptions—come from my mind. My past doesn’t dictate my present or future. We can remake ourselves and make meaning that allows us to live powerfully in the moment. And our names can be changed, too—even if only for a day or two.

Try it and see what you discover.

Life Consists of Three Kinds of Moments
Grow Your Brain

4 Responses to Remake Ourselves

"Don't be afraid to go out on a limb. That's where the fruit is."— H. Jackson Browne