By Jake Eagle on October 31, 2014 in Relationships 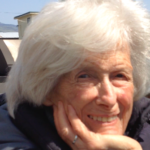 It was about a week ago when I asked my mother, “How old do you feel like you are?” She said, “Twenty-three.” And if I were to measure her by her spirit and enthusiasm for life I would agree.

In physical years she is eighty-nine—and dying. She finds this quite confusing. As she explained to me yesterday, “It’s mostly old people, tired people who die, so why is this happening to me?” I have no good answer. She is one of those people who should keep on living—not just because she wants to, but because her life has been one of giving to other people.

Even on her deathbed, she wakes from a medication induced stupor, opens her eyes, sees Hannah and me, smiles and asks, “How was your workshop last night? I hope a lot of people showed up.” Then she apologizes that our visit with her doesn’t appear to be much fun.

She’s been like this her entire adult life—concerned about the well being of others. When I was a child she was a volunteer for the Red Cross. Years later she became a psychiatric aid, working at the Hartford Hospital as a therapist. Today, twenty years later she still gets letters, packages, and phone calls from ex-clients. She has always related with and spoken about her clients as people in her life, not as clients.

As a child my mother’s nickname was “Joe.” When she went to Skidmore College in upstate NY, she had to choose between her dream of becoming a horse stunt rider or a nurse. I think she would have chosen the horses and a circus, but her parent’s influence carried the day and she pursued her education.

After school she didn’t become a nurse, but married my father, raised a family, and lived in love with him for sixty years. Their marriage is best characterized as something that was meant to be. They didn’t work at it. They just loved each other fully, 100%, and had a great time doing so. It was easy.

“Joe” is a bit of a miracle—because of her continuous joy and optimism, but also a literal miracle. She was told she would never be able to have children; it was a physical impossibility. She only had one ovary and one fallopian tube—and they were on opposite sides. This resulted in five miscarriages, but also three children, two of whom are still alive—my sister Lizabeth and me. This miracle is written up in medical text books.

Do I sound enamored with my mother? I am appreciative and admiring. I see her as a remarkable woman. But I also did the hard work required to individuate from her. I started my process when I was very young, at age 16. That’s when I left home. And the reason I left is because my mother was my best friend and it was starting to become awkward to be a boy of 16 with my mother as my best friend. But, she was. There was no one I would rather spend time with.

My departure from my family of origin was abrupt and mostly unconscious. I didn’t know why I was doing what I did, I only knew I needed to break free or I never would.

In my late twenties the process became more overt. I went through years during which I distanced myself from my parents. I called them by their first names instead of “mom” and “dad.” I changed my name. I don’t think that I broke their hearts, because even though I disengaged, I was almost always respectful, but I’m sure my process was painful for them. And I was doing well in my life, which helped them trust my decisions.

I say that I was always respectful, but I can’t take full credit for this. “Joe,” has always been loving and giving and generous and has made her boundaries quite clear. If I crossed her boundaries I would hear about it. She has held a sharp edge her entire life. She has always expected to be treated respectfully. And she has earned this right based on the way she treated people, so if someone violated it, the rebuke was immediate and strong.

But never any grudges. No holding onto hard feelings. If there was a problem, we would talk it through and reconnect—almost always with laughter and enthusiasm for whatever was next.

So, largely because of her nature, when I was done pushing her away—so that I could grow myself up—we reconnected and have enjoyed an adult/adult relationship for the past 25 years. My mother survived the death of my brother—her firstborn—and a year later the death of my father, her lover. That was five years ago.

To my surprise, after these tragic losses she went on and found joy again and beauty—in simple things. Picking fresh raspberries from the plant just outside her kitchen door. Watching a good movie, reading a good book. Listening to music and singing in the local choir every Thursday night. Listening to her grandson, Chama, as he has visited with her every day after school. And watching Roger Federer play tennis when she was no longer able to do so, but continued to think she would.

Tomorrow will be better

“Joe” is close to the end of her life. Don’t tell her. But it’s inevitable now. She will live on in me until I die. She will be my—and other people’s— inspiration for living a simple life and being an abundantly good, loving and generous person—always believing tomorrow will be better.

Make The Most of NOW
Why Not Be Present? There’s A good Reason

3 Responses to A Remarkable Woman — my mom