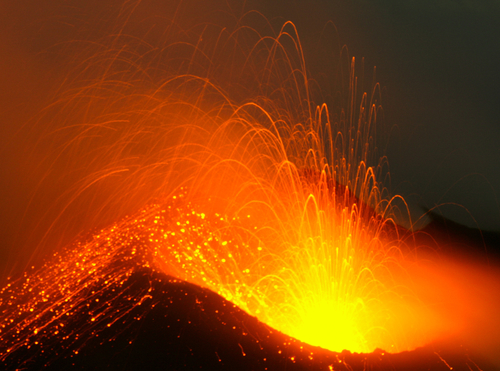 “I was sound asleep when I heard pounding on my door, and then the door being kicked in. The man who came in was shaking; he was scared. He hustled me out of bed, pushing me toward the door, telling me I had to evacuate my home. I got out with my purse, the nightgown I was wearing, and my two dogs. One dog volunteered to get in my car, the other hesitated, and the terrified man picked him up and threw him in the car, yelling at me to ‘step on the gas, get out of here as fast as you can.’ There was only one road out, and everyone was trying to escape the volcano’s fury. I never even heard the sirens, because the sirens, which were high up on poles, were buried under lava.

This was the fantastic story we heard from a woman standing in line at the pharmacy in Waimea. She was there with her beautiful Doberman, a well-trained assist dog named ”Rock Star”. That’s how she got our attention. Jake asked if he could connect with the dog, who was very special. She told us that she had just moved into someone’s garage on the “wet” side of Waimea, where it rains all the time.

The home she had to evacuate was her bed and breakfast at the Kapoho tide pools—which she described as, “the most beautiful place I ever found in the world, and I’ve traveled everywhere.” She bought her home in Kapoho eighteen months ago, out of foreclosure, and then used all the money she had to remodel and transform it into a bed and breakfast. It was her retirement home that allowed her to live surrounded by beauty, sharing it with guests, and making a modest income. “Now,” she said, “it’s under forty feet of lava along with everything I owned.”

Here’s what she said: “It was liberating. All the stuff I used to hang onto, the photos, the kid’s artwork, a lifetime of stuff I couldn’t let go of—it’s all gone.” Everything she knew to be a part of her life and identity were gone. And she said it was liberating. And we believed her.

She told us that the worst part was the terrified man busting in her door to rescue her and the drive to escape. That part of the experience felt traumatizing, and she was shaky for two or three days. But in the end, she is happy to be alive, and although living in a garage where it’s always raining, is challenging—she feels liberated. She’s liberating herself.

I stunned myself listening to her; she made the whole volcanic eruption far more real and personal to me. I appreciate my life and put into perspective any challenges that come my way. Nothing that happens is likely to ever come close to what this woman experienced.

We left the pharmacy, and drove home over the mountain, back to our little town, Hawi. It’s one of the most stunning drives in the world, and I felt so appreciative and fortunate.

And later that night:

That night we went to the Kava bar. Many local characters gather every Friday night at the Kava Kafe. Not your typical bar, no one is getting loaded, there is no alcohol. The place is alive with kids and dogs and neighbors, and the local characters, gathering one evening a week. There is one meal available that one can buy for supper, always vegetarian, usually with a gluten-free option. Tonight it was enchiladas, and I ate them, even though they were full of nightshades. The food was yummy and I enjoyed the moment and will probably suffer some tomorrow.

These people are real, unpretentious, gentle, loving, and happy (those drinking kava are even happier). The effect of kava is not a high. It just puts a smile on your face, if you haven’t already got one. Some of the old-timers in there were drinking kombucha. That’s the other item on the menu. But even the kombucha drinkers were smiling 🙂

As for the volcano, I never got to see the beauty of the Kapoho tide pools. They are now buried under lava until the end of time.

What’s the gift in that?

There are two for me. I won’t expect people or things to always be there for me until I get around to them. And, as demonstrated by Rock Star’s mom, even in the most challenging of circumstances, I can find things to appreciate, choose to live in heart consciousness, and be thrilled to be alive. That’s definitely liberating!

Click on the link to see how fast the lava was flowing:

I Want To Be Thrilled

What are the keys to living a meaningful life and having healthy relationships?
Don’t Try So Hard

2 Responses to Surviving The Volcano