By Hannah Eagle on April 28, 2012 in Communicating, Mindfulness 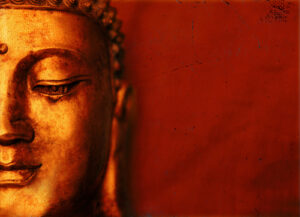 An ancient Pali language, the language that the Buddha spoke during his lifetime, was a “verbing” language.

This way of speaking was unique in that it allowed one to stay in process, not fixing oneself or clinging to a static or permanent state, but being in motion, continuously unfolding; a foundational premise of Buddhism.

For example, Buddhism’s goal of practice, Nirvana, would not be a noun but a verb – Nirvana-ing ourselves – (actively) putting out our fires of greed, hatred, and delusion  –  rather than reaching a state of nirvana. Instead of the Buddha finding a path of enlightenment (a static state), he would be saying that he found a path for enlightening ourselves — an active, continuous process.

From Pali scholar Lily de Silva, “though we use a noun called ‘rain’ which appears to denote a ‘thing’, rain is nothing but the process of drops of water falling from the skies. Apart from this process, the activity of raining, there is no rain as such.”

There is a modern day equivalent to this perspective and way of speaking. It is called Perception Language. This is a more recent linguistic development from the 60’s that is also not well known.  I will get to that later, but first more about the Buddha’s teaching.

Much of the story of the Buddha’s life is mythology. What we know about him is based upon a collection of stories. Buddha was a part of a social movement of “renouncers” who rejected the caste system and the hierarchy of Brahman.

Use Perception Language to wake yourself up

Significant numbers of followers of Buddhism were waking up in the time of the Buddha because the language-ing was so radically different. The ideas and words were based upon “verbing” oneself, which helped people recognize that “self” was a process, dependent upon conditions arising and passing away.  This radical idea was hugely liberating in India when people thought there was no other option but to be locked into a caste forever, not even changing with rebirth. Buddha taught that an untouchable could become a merchant based not on faith but on their actions.

The modern equivalent mentioned above was created 50 years ago by psychologist John Weir and his wife Joyce and more recently refined by Jake and Hannah Eagle of ‘Live Conscious.com’. It is called Perception Language.  It can be adapted to any language (Spanish, German, French, Japanese) and one key aspect of it also involves turning certain nouns into verbs—similar to how we imagine Buddha spoke.

For an over simplified example of Perception Language, “He makes me angry” would become “I anger myself”. This un-sticks us from the static state “I am” and puts the experience into motion with “I anger”. This is significant because if I can anger myself, and see that this is something I am doing to myself, I have the power to choose if I want to respond in another way.

Use Perception Language to keep yourself present

Another key aspect is that Perception Language helps us stay in the present moment by speaking about what’s happening right now. If there is something that happened two weeks ago and you are troubled by it, the point is to talk about how you feel right now, not two weeks ago. Speaking in this way reminds us that whatever is happening is happening right now. “Now” is constantly changing. All things are temporary. As we use language in this way we become less attached and more flexible.

Perception Language promotes mindfulness, helping people bring themselves into the present, and encouraging them to take more personal responsibility, cutting through illusion. It reminds us that there is a world out there but the only thing we can know about it is our perception of it. With this language we become conscious that we are constantly making meaning of everything we encounter, enabling us to have a high degree of choice as to whether we react with hostility and defensiveness or respond maturely and appropriately.

As ancient followers of Buddhism did with Pali language, we can use Perception Language to complement any mindfulness practice to wake ourselves up. This linguistic practice is available to us every time we speak – to ourselves and others.

How would you like this article? It’s great. Fill in the form below and we’ll immediately send it to you.

To get started learning the basics of Perception Language:

Read this award-winning book that will help you learn to be right here and right now. It’s written is an easy to read style as a conversation between Jake Eagle and his brother. It explores the meaning of life, core-limiting patterns that hold us back, the process of individuating, ways to discover our values, and a new way to speak to yourself and other people.

Love or Fear
Within Our Romantic Relationships, Everything is a Chance to Connect