By Hannah Eagle on August 16, 2013 in Individuating 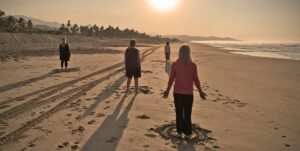 Moms (and Dads) have their ways.  They can be pretty powerful in good ways and in not so good ways. Much guidance and direction are needed when we are young, but when we find we’re still being directed, manipulated or controlled (often in our own minds) by our parents  as adults, how do we stand up for ourselves?

Patterns of parental control are often not even recognized when we’re adults because we’re so used to them. Once identified, the solution is breaking the pattern.

Someone recently wrote to us wanting help with individuating from her mother. She described her mother as the kind of person who always needs to be right.

She said that there were many times when she tried to assert herself, but her mother would either “crumple or get very righteous”, and the conversation would go nowhere. She consistently felt judged by her “very judgmental mother”.

This was a pattern set up long ago, the daughter trying to assert herself, the mother being emotionally controlling and manipulating, and the daughter never feeling heard.

Individuating From My Mom

Years ago, when getting therapy around this very issue,  I was given the assignment to, once again, go confront my mother. However, this time, I was to notice how she would try to manipulate our conversation.

My therapist told me, “watch what she does.”  He predicted: “She will get angry, and if anger doesn’t work, she will go to tears, and when tears don’t work she will return to anger and when that does not work she’ll return to tears.”

That’s just what happened! I was amazed. I couldn’t believe I’d never noticed this before. Here’s how it went.

I arrived at my mother’s house and asked if we could talk for a few minutes. We sat down at the kitchen table. After my first two sentences she bristled and before I could pause for my next thought she was angrily lashing out at me.

I calmly thought, “Okay, here’s the anger.” She paused to notice that I was not flaring up, and then she burst into tears. She was the victim, and I was the perpetrator. I said to myself, “stay calm and stand up for yourself—here are the tears.”

When she noticed the tears did not phase me, she really got angry!  “There’s anger again.”  And shortly thereafter she flipped to tears.

Oddly enough, I even pointed out what she was doing, but she could not stop herself from acting out the same pattern over and over. This is how she had handled (perceived) threats all of her life, she did not know how to behave otherwise.

Between her anger and tears, I’m not sure how much she heard of what I had to say that day. But that wasn’t what was important to me.

What was important was that I was able to observe my mother’s—mostly unconscious—behavior; yet this time I didn’t allow myself to be manipulated or controlled. I was able to remain an observer, stay calm and clear and make my point.

It did not matter so much if I was heard. What mattered more is that I could say what I needed to say and stay calm.

There was a pattern that was broken that day—I did not buy into her manipulation. I did not react when she moved from one tactic to the other. I did not engage in the pattern at all. She could no longer control me. And after I broke the pattern, I was no longer affected by it.

From that day on, my sense of myself was quite different. I had taken my power back. I did distance myself from her for a period of time, as I got more solid on my individuated feet. But once I returned to relate with her again, I never slipped back into that old dynamic.

And because I changed, she changed. Actually, I believe she ended up respecting me more because I was finally becoming my own authority. That was a giant step in individuation.

So, why didn’t this work for the woman who wrote to us about individuating from her mom? The woman clearly saw the pattern between herself and her mom. This woman would “try to assert” herself and her mother would “crumple or get very righteous.”

The step she had not taken was to stop playing her part in the pattern. She did try to stand her ground but she did not express “an unshakeable sense” of herself when around her mom. It was “too easy to get lost.”  Try as she might to resist, she still allowed herself to be sucked into the pattern.

Had she said to herself, “Oh there is my mom crumpling—and there she is being righteous,” and had she been able to stay the observer in a non-reactive way, more quickly than you might imagine the pattern would break.

One more piece that I might add is that my process with my own mother happened more or less 25 years ago, before I knew Perception Language. If I’d had some Live Conscious tools in my toolbox, the conversation would have been easier for my mother.

If I had been using Perception Language, it would have been easier for my mother to realize that I was not telling her about her, because I was only talking about myself, my experience, and our process could have been much more gentle.

10 Responses to Stand Up For Yourself