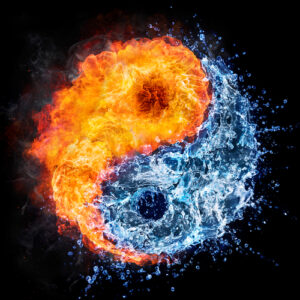 When I wrote the headline for this article I thought it sounded like the opening for a good joke, (A Christian preacher, a Catholic priest, and a Jewish rabbi are out on a boat for the day…), but this isn’t a joke and I don’t have a punch line to share with you. Instead, I want to share a very pragmatic approach for dealing with the challenges that come from chronic fatigue, mild depression, and certain types of erectile dysfunction. This article will present an alternative view for dealing with these challenges.

All three of these “problems” embody a certain physiological state. To help explain this I’ll share with you the “Physiology Map.” (NLP Master’s Training Manual, 1993). 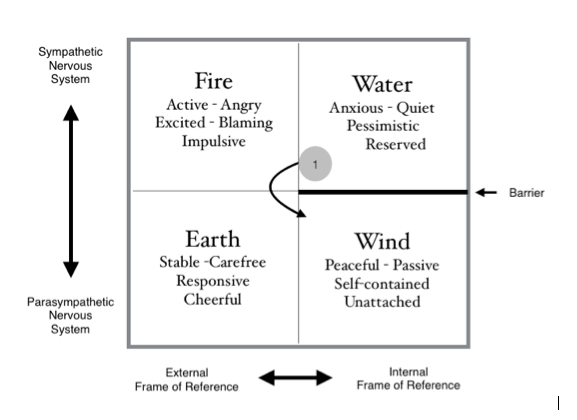 And it is our parasympathetic system that allows us to “rest and digest.” During times of low stress, reading a good book, or sitting quietly, this is the system that controls our basic bodily functions.

“… the physiological effects caused by each system are quite predictable. In other words, all of the changes in organ and tissue function induced by the sympathetic system work together to support strenuous physical activity and the changes induced by the parasympathetic system are appropriate for when the body is resting.” (American Journal of Pharmaceutical Education, v71, 2007)

By identifying one’s frame of reference (internal or external) and one’s autonomic nervous system activity, we can create a map containing four quadrants, each one consisting of certain character traits, emotions, and attitudes, as described below:

One might expect a person struggling with chronic fatigue to be identified on the lower portion of the map because they seem to lack energy. However, more often than not these people have highly activated sympathetic nervous systems, which manifests as anxiety. This is part of why they feel fatigued, because they expend a great deal of energy being anxious.

Many therapeutic solutions for addressing chronic fatigue direct the client toward self-soothing practices like meditation or affirmations. These approaches are inviting the client to go from the Water quadrant (anxious) to the Wind quadrant (peaceful), which is physiologically very hard to do without passing through the Fire quadrant. Notice the thick black line between these two quadrants that represents a barrier. It is physiologically rare to go directly from a state of anxiety to a state of equanimity, especially when people have a high degree of internal mental chatter.

People must proceed through the Fire quadrant as a way to discharge some of their built-up energy (arrow #1). This requires a willingness to feel some of their emotions, and hopefully express those emotions in appropriate ways. When this is done the client’s physiology will down-regulate from sympathetic arousal to parasympathetic rest, rejuvenation, and recovery.

Therapeutic strategies that encourage clients to unilaterally forgive others or love themselves are attempts to bypass Fire and go directly to Wind. Based on my observations, this strategy seldom works and usually results in very long term treatment.

Alternatively, it is possible to work with the emotions that have accumulated over time, which are likely to include despair or resentment when the person resides in the Water quadrant. And as the person moves into the Fire quadrant their emotional charge can be redirected and then their anger can be maturely expressed by taking such actions as redefining personal boundaries with other people, or standing up for oneself in situations that feel unfair.

Erectile Dysfunction is often, though not always, a result of not being able or willing to sufficiently access the Fire quadrant. In fact, it is necessary to access a state of sympathetic arousal for a man to ejaculate. That means going into Fire.

Once again, we see that common therapeutic responses to erectile dysfunction include self-acceptance, forgiveness, and mindfulness practices intended to alleviate anxiety. All of these are attempts to downregulate the nervous system and avoid the Fire quadrant. But downregulation is not what’s needed, what’s needed is an outward expression of the sympathetic nervous system—and that takes place in the Fire quadrant.

I have witnessed consistently high rates of improvement of erectile dysfunction when men are willing to access the Fire quadrant, with the guidance of a therapist, so that they get in touch with their feelings—typically anger—and express their feelings in a robust, animated and appropriate way. I am not suggesting they remain in this state, but passing through Fire can help the phoenix rise again.

Mild depression often involves pessimism, reservations and anxiety. These passive emotions often lead to self-pity, sulking, regret and despair. The downward spiral continues reinforcing itself at each turn. When these passive emotions are actively expressed in an outward manner—by going into the Fire quadrant—the cycle is broken.

Initially, the outward expression may include blaming, which is an immature expression, but as the individual’s nervous system begins to discharge, and by learning certain skills, anger can be maturely expressed, which is the goal. A mature expression of anger is not blaming other people, but taking responsibility for one’s own participation in whatever is going on.

In all these situations—dealing with chronic fatigue, mild depression or erectile dysfunction—going into Fire can be part of the solution. For many people struggling with these challenges, and for many therapists, this approach may seem counter-intuitive. When people are in a highly anxious state (Water) we want to help them calm down so we try to quell their anxiety. However, from a physiological point of view, going through Fire is often a necessary step to reduce anxiety.

The key is being able to access feelings of aggression, anger, and frustration and then express them—but to do so with a mature voice. If the client simply expresses their anger immaturely, that is likely to create conflict in their lives, which is what they have been trying to avoid and part of why they were stuck in Water.

Any emotion can be expressed in one of two ways: immaturely or maturely

Mature expression of emotions is best accomplished by using Perception Language, which empowers the person and makes it easier to take responsibility for their feelings. Additionally, mature expression of emotions requires a person to expand their time frame—to think about more than how they feel in the moment. And it requires expanding their perspective to include other people who are affected by the situation. When one expands their time frame this helps put the challenging situation in perspective and when one considers other people who are being affected this reduces the tendency for the “sufferer” to get lost solely in their point of view.

Must Our Histories Cast a Shadow on Love?
Part 1: Trying To Be Present Creates Anxiety — Creating Presence Reduces Anxiety

4 Responses to How to Work with Chronic Fatigue, Mild Depression and Erectile Dysfunction