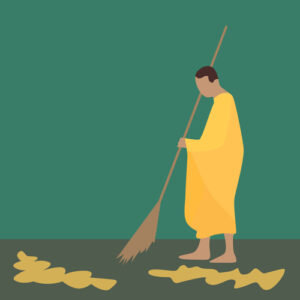 Do you believe in “channels”? I’m not talking about television stations, but the idea that spirits, voices, entities, can come through us and communicate information. I never have. But that didn’t stop me from channeling the following message last night. The voice was clear, and so insistent that I had to get out of bed and make notes.

My belief about events like this, channeling, comes from a remarkable book written by Julian Jaynes, The Origins of Consciousness in the Breakdown of the Bicameral Mind. Simply put, one hemisphere of our brain hears auditory hallucinations that are coming from the other hemisphere of our brain. So, for now, that’s how I explain what happened. The explanation doesn’t matter to me, I found the content of the message very compelling—and I hope you do, too.

Look at what a mess you’ve created. When I say “you,” I mean all you fools. You don’t get it. What you’re doing isn’t working. You’re making a mess of things, not the least of which is your planet. I can summarize it in one word: Trump. And you’re all creating the mess—those who like him and those who don’t.

For those who like him or his policies, you’ve still got to admit he’s an embarrassment to your species. He’s dishonest, reactive, thin-skinned, lacks empathy, and he’s self-absorbed.

And for those who don’t like him—no explanation is needed—be careful you don’t start sounding like him, becoming reactive (to him), lacking empathy (toward him), and become self-absorbed to the point that you don’t understand the people who did vote for him.

Why don’t you like him? Because you’re afraid. You’re scared of the direction he’s taking your country.

You like him; you don’t like him, either way, you’re scared. And he uses your fear to manipulate you.

The political answer is to raise people out of poverty and eliminate ignorance.

Look at the psychological models you rely on; they’re part of the problem. Why? Because they’re created by people who live primarily in safety consciousness. Take Maslow, his model is based on satisfying your need to feel safe, getting love from other people (and when love comes from other people you still don’t feel safe because it can be taken away), and measuring yourselves based on how much recognition and respect you get from other people—all of which is external validation.

Maslow admitted very few people would ever become self-actualized. Why? Because the lower four levels he described—survival, safety, belonging, self-esteem—occupy almost all of your attention. His model suggests that you work your way up the levels; first, you crawl, then you walk, and a few rare people will be able to run someday.

But crawling, walking, running—they all operate on the same plane. Even if you run, you’ll end up at the same place as the crawlers, you just get there quicker. What is that place? It’s illusory self-esteem that is based on creating enough safety (money, reputation, external validation), so that you think you’re okay.

You were built to fly!

But crawl, walk, or run—you’re missing the point. You were built to fly!

Is anyone on your planet talking about humans flying? Brene’ Brown sounds like she is. She’s a superstar since doing her TED talk and being endorsed by Oprah. Incredibly charismatic. And her message seems so good; it’s all about being courageous. She says, “Vulnerability is hard, and it’s scary, and it feels dangerous, but it’s not as hard, scary or dangerous as getting to the end of our lives and having to ask ourselves, ‘What if I would’ve shown up?'” So many of you love her message.

But here’s the thing—she’s validating the idea that it’s hard to be vulnerable. Who says so? Brene’ Brown says so, but that doesn’t make it so. It reminds me of that game you people play, what’s it called? “Simon says.” Your gurus and teachers tell you relationships require hard work, and all of you nod, “yes.” They tell you to heal your inner child, and you nod, “yes.” Brene’ Brown says being vulnerable is hard and scary, and you nod, “yes.” But it’s only hard when you live in safety consciousness. It’s not hard if you’re in heart consciousness. It’s effortless. Open your hearts and stop resisting.

Safety consciousness is characterized by a busy mind, discovering and solving problems, analyzing and worrying, getting lost in stories, complaining, striving, and working harder than before to create a sense of safety and security in your lives. Safety resists change because change is unfamiliar, unknown and therefore considered a threat, of sorts.

What are your other popular theories these days? Oh, that’s right, attachment theory has been hot for a while now. Four kinds of attachment are supposed to explain why you behave the ways you do and why you choose the partners you choose and why you make a mess of your romantic relationships. What are the four attachment types? Ask your know-it-all Google, and it’ll tell you: Anxious and preoccupied, Dismissive and avoidant, Fearful and avoidant, and the last one is Secure attachment. Notice how these are all rooted in ideas related to safety.

What do people do with attachment style theory? Mostly they use it to justify why they behave the ways they do, why they have a hard time being intimate, and why they need to protect themselves against repeating patterns from their childhoods — crazy shit. Really, if you want to have a fabulous romantic partnership, stop living predominantly in safety consciousness. Check off the few boxes that are necessary for safety consciousness, then shift into heart consciousness. Instead of worrying about someone breaking your heart, break open your own heart, and stop resisting love.

“But what if my mommy abandoned me?” Well, that depends. If you’re born in western culture and you buy into your psychological models, you earn yourself six years of weekly therapy sessions. But, if you’re born in another culture, say Namibian, a community of people raises you, and you never feel abandoned by your mother because no one told you that was an option.

Psychology is created by culture. It’s not the truth. And in western culture, it was developed by people who lived primarily in safety consciousness. No wonder you struggle as much as you do.

Oh, where to begin?

Why are you afraid of change?

Because you don’t understand life.

Let me put it this way.

Where should you put your attention?

What about being hurt?

Hurt happens when you close your hearts.

Hurt happens when you resist life.

Stay open, come back to the miracle.

Come back to this moment.

There is a simple and profound way to understand different levels of consciousness, a map if you will. The map shows the way in and out of safety consciousness, as well as the path that leads to your heart.

If you want to explore the map, and if there’s still room, sign up for Jake Eagle’s Thrilled To Be Alive course. Why Jake’s course? I’ll tell you…Jake is one of those people who spent decades getting good at navigating safety consciousness. Like so many of you, he was preoccupied with it. And he didn’t realize the limitations, his limitations, until he moved to Hawaii—and that’s when his illusory bubble burst. Since then, he’s struggled, reoriented himself, and grown a pair of wings that qualify him to take people on guided tours into heart and spacious consciousness. If you haven’t seen him for a while, you might not recognize him.

And since you’re all so young—kids, really—you may think that to be thrilled has to do with things like skydiving, but it doesn’t. The original meaning of “thrill” was “to pierce or penetrate.” Now is the time to pierce or penetrate the illusory search for safety, and instead, let your light shine bright and soar with an open heart.

How To Lengthen Your Life
Test

2 Responses to The Answer To These Troubled Times