By Jake Eagle on December 3, 2018 in Being Your Best You, Communicating 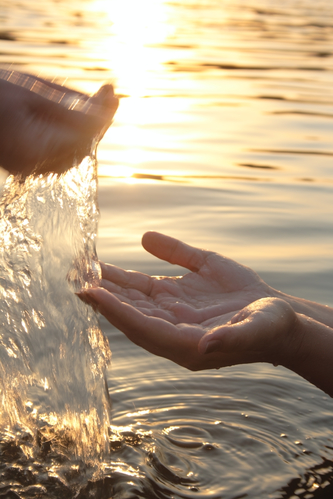 Today, Hannah and I fought. Maybe I exaggerate a bit, but for us, it was a fight. It lasted about ten minutes. We were walking around in our partially constructed new home, and the scene went more or less like this:

Jake, “I’m frustrating myself with people who join our conference calls, and they don’t reciprocate by donating. And it’s not because they can’t afford to. I’ve made it clear they can donate whatever they can afford, and those who can’t afford anything can send me a poem or some expression of appreciation.”

Hannah, “And you’re making up a story that makes you unhappy, so why don’t you make up a different story? Why don’t you focus on the people who wrote those beautiful emails talking about how much they helped themselves with the group calls?”

Hannah, “Well, why don’t you? It’s a good chance to practice what we teach.”

Hannah, “I don’t understand what’s going on right now. I’m suggesting you do what you’re teaching people to do—notice the stories they make up and change them, focus on the bigger picture. There is so much to appreciate. So why are you saying ‘never mind’”?

Jake, “Because you’re jumping ahead of me. I don’t feel like you understand. I want people to value this work—the courses and the conference calls—so much that they make it a priority. If they don’t, then I start questioning if it’s worth teaching. And if I’m not teaching this material that I love so much, and engaging with people in deep conversation—then I have no idea what I’m doing. And that’s what this is about for me, what will I do in the future.”

Hannah, “I get it. I understand this uncertainty about your future and your identity is a big question for you. You’ve been wrestling with this since we moved.” (Bingo)

Jake, “I have. And I believe it’s a big question I’m asking, one that’s worth answering. As we age, it becomes more difficult to hold onto our old identities, but that’s what we seem to do instinctively. And I suspect that the answer lies in the opposite direction, which is becoming comfortable with letting go of our identities.”

Hannah, “I want to remind you that if you look at the big picture of your life—like you teach people to do in the ‘canvas meditation’— and you stay connected to the wonder of being alive, you’ll be better able to answer the questions that seem unanswerable when you get too intense.”

Jake, “Thanks, I appreciate you. And, I think this constitutes our first fight in our new home, so what do you say we go and makeup. . . “

I’m sharing this interaction with you because I want you to notice the shift that occurred right where I inserted the word “Bingo.” It was at that moment that I stopped resisting Hannah. Why? Because I felt witnessed—seen, understood. Being witnessed is different than feeling validated. I never felt like Hannah agreed with me, or that she thought my circumstances justified my mood, but I did feel like she understood that the question I was wrestling with is a big deal to me. As soon as I felt that, I relaxed.

In safety consciousness we measure ourselves

So here’s what happened to me, I was in safety consciousness, measuring myself based on how many people made donations. Not enough donations and I started to question if other people valued my work. I created a story around this. I told myself that if people don’t appreciate my work, why bother to teach it? And if I don’t teach it, then I don’t know what to do for the next twenty years. That’s the story I was making while being in safety consciousness.

While I was in safety, Hannah was in heart-consciousness, and she invited me to join her by suggesting that I could change the story I was telling myself. She encouraged me to focus on the positive aspects of my experience. But I couldn’t, or I wouldn’t. I wanted or needed to be met where I was.

So, how do you meet someone where they are without commiserating with them? In this case, it was as simple as saying, “I understand what you’re telling me, that you’re struggling with what to you feels like a big question about your identity.” (Bingo)

This demonstrates the profound effect of witnessing. As soon as I feel witnessed, my nervous system calms down. It’s a gift you can give your partner, children, or friends.

Why we need to be witnessed

My theory about this is that our need to be witnessed is a survival mechanism that resides in safety consciousness. Imagine if I come running into your house and I yell, “The house is on fire!” You respond by asking, “What’s for dinner?” This will make me crazy because I need to know that you hear me and understand what I’m saying. Our survival could be at stake.

When two systems (such as your nervous system and another’s nervous system) vibrate at the same rate—they are in sync, on the same wavelength—they resonate.

After Hannah witnessed me, we resonated, and then she invited me to have a higher-level conversation and this time I accepted. What happened? She “entrained” me.

There are times when we might invite someone to have a higher-level conversation (heart consciousness), and they will join us. There are other times when they will resist. If they resist, we need to take a moment or two to witness them where they are, until we resonate.

Some people, in some situations, need to be met where they are before they move. When I’m stuck in safety consciousness, there are times when I must feel understood by Hannah before I can hear her or make sense of what she’s trying to tell me.

We’ve all experienced this on our own—in relationship to ourselves. We have some feeling that we’re ignoring, something niggling away at us, but we push it aside. We distract ourselves. It doesn’t go away. Then, at some point we acknowledge how we feel, verbally or non-verbally—we witness ourselves—and as soon as we do so, we feel better, more present. We are in resonance with ourselves.

Resonating with another person is one thing, entraining them is another. This is something Hannah and I are teaching people to do. We can do this individually, or we can do it as a group. When a group of people—about twenty people is the ideal size—are collectively entraining each other, a whole new world of possibilities opens up.

I want you to imagine being entrained by twenty people all at once, all day long, for eight days—while also playing your role entraining those other people. That’s what happens at the retreats we conduct, and we are holding another one, possibly our last one, this winter.

Many people who read our articles and books, or who have attended the Thrilled To Be Alive course say, “Someday I’d like to go on one of your retreats.” Well, if you want to, now may be your last chance. We don’t know what we’ll be doing in the future, but we have no plans to offer more retreats like the ones we’ve been providing.

We sadden and excite ourselves with this prospect. We inherited a brilliant model from our mentors, John and Joyce Weir, and we want this model to live on. At this stage in our lives, we’re not quite sure how to breathe more life into this work. Part of the challenge is that with the internet there are lots of courses and self-help programs out there, but there’s nothing quite like this model that we’ve been stewarding for the past twenty years.

Our retreats have an invisible element built into the design that results in participants being witnessed and entrained. And it all happens organically, without thinking about it—and that’s key because thinking about this can result in people down-shifting into safety consciousness.

Being witnessed, resonating, learning to entrain and be entrained, all of these are why people end the retreat in love with themselves and with the other people in the group.

The Thrilled To Be Alive courses I’ve been teaching are contributing to people living their lives at a higher consciousness. But even those practitioners don’t realize how far they can take this, because they live within the chaotic buzz of our fast-paced, multi-tasking culture.

The greatest challenge I have working with people is countering the effects of the culture we live in—too fast, busy, overwhelming, and vibrating at too low a level. When we go on these retreats, we escape all those pressures and limitations. We access new levels and learn multiple skills while being part of a supportive community. We become more adept at maintaining a higher level of consciousness.

In so doing, we create substantial change in our lives and in the lives of those we come in contact with. And this is where I resonate with Gandhi’s words, “If we could change ourselves, the tendencies in the world would also change. As a man changes his own nature, so does the attitude of the world change towards him. … We need not wait to see what others do.”

As a result of Hannah witnessing me, resonating with me, and entraining me . . . I’m a different man. And I’ve gotta run now because Hannah has been waiting to make up after our “fight.”

If you would like change yourself: apply for our next retreat.

(If you enjoy my articles, please know that they are edited by Katharine Rivers—a freelance editor. If you want to inquire about her editing services, you can send her an email by clicking here.)

2 Responses to The Secret To Great Relationships