By Jake Eagle on November 5, 2016 in Live Consciously 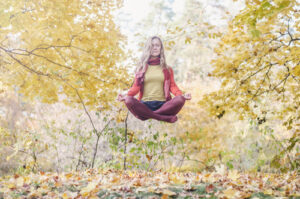 There are two ways to be powerful—one is to use force, the other is to embody presence. Force may get you want you want, but you’ll leave behind messy emotional footprints. Embodying presence will get you what you really want—if you want a life without suffering.

When we use the power of force we create winners and losers. Resentment builds. The person using force can be perceived as the perpetrator, the person being forced feels like a victim. The victim will inevitably resent the person who holds power over them and they will seek to use their own force as a means to retaliate. So goes civilization and so go relationships.

I see it every day in my private practice; romantic partners using force with each other when it would be much easier and more respectful to use the power of presence. Parents using force with their kids, which results in a backlash, when it would be so much more helpful for the kids to show them how to use the power of presence.

Force wears many faces. Hitler. The bombing of Hiroshima. The Taliban. Perpetrators of sexual abuse. Detaining people at Guantanamo Bay. Intervening in the Bosnian war to bring about the Dayton Accords peace agreement.

Force is used when intervening in a teenager’s life to stop them from hurting themselves. It is also used when you tell your partner that they are wrong to feel the way they feel. Or, when I force myself to do what feels wrong to me. Interrupting people is a use of force. Withholding love. Making a child take his medication.

Force can be used for good and evil. Force is not always bad. But too often force is used when presence would be a better choice.

Presence is always overt, never covert. I access the power of presence by fully occupying the space I’m in, in the present moment, being fully available to compassionately witness others and myself. When I enter a state of presence—spacious being—I am aware of the miracle of life.

I don’t know if it’s possible to live continuously in this space—I am not able to do so—because there is the business of doing, planning, negotiating, consuming—products, information, and food. For me, the question is one of depth. How deep do I want to go? When I access the power of presence I am accessing myself at a deeper level than when I go about the surface activities of life.

Presence wears many faces. There is the presence of Gandhi, advocating non-violent protest for Indian self-determination and independence. The presence of Aldous Huxley, who wrote Brave New World, and was denied US citizenship because he would not commit to taking up arms to defend the US. The presence of the Dalai Lama who never victimizes himself when all evidence suggests he has reason to do so. The presence of Aung San Suu Kyi, the state counselor of Myanmar and winner of the 1991 Nobel Prize for Peace, who said,

The power of presence was modeled by Thomas Merton, the American Catholic writer and mystic, who said,

The beginning of love is to let those we love be perfectly themselves, and not to twist them to fit our own image.

The twisting he refers to requires force, the “letting those we love be perfectly themselves,” requires presence—the presence to witness them as they show us who they are.

Presence Is A Choice

When we learn to access the power of presence we realize no one can take it away from us so we stop feeling threatened. We relax; open ourselves to our feelings and the feelings of others. And often, the power of presence—being fully present with another person—is all they need. So many arguments are not about the subject of the argument; they are a disguised desire to be witnessed.

In our personal relationships, when we access the power of presence we don’t argue, quibble, make wrong, deny our partner’s experience, coerce or manipulate. Whatever my wife, Hannah, tells me, I start with the assumption that it is true for her. This very simple idea eliminated 70% of the arguments we used to have. Whatever she tells me is true for her.

Although the power of force may be appropriate when we intervene to stop a teenager from hurting himself, it is not necessary when we are trying to get a teenager to spend less time playing video games. The difference is that in the first example the teen is harming himself and we may need to force the resolution of the problem because the stakes are high. In the second example—the teen playing too many video games—the power of presence is more appropriate. What would that look like? There are two pieces. The first is taking the time to thoroughly understand the teenager’s experience as it relates to playing video games. Why does he play so much? What does he get out of it? Does he have any concerns about it?

The second key is lovingly expressing our concerns. Then the decision rests with the teenager. If you, as a parent, were to test this method as a one-off, after years of relying on the power of force, it might not work because of built up resentments. But if you change your parenting approach and consistently rely on the power of presence you will be fundamentally altering the dynamic with your child in such a way that he or she feels respected. This alone will change the way your child hears and values your message.

Presence requires willingness and an ability to be in the moment, to know one’s self and to reveal one’s self in an appropriate manner.

The work we are doing in our retreats is aimed at teaching people a different way to live and love—including how to access the power of presence.

Honoring Your Truth
The Invitation