By Jake Eagle on September 19, 2014 in Relationships 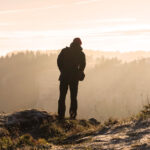 And where is there?

This past week I worked with a couple of different clients who have made remarkable progress in terms of their personal growth and maturity. Both men. One thirty-years-old, the other forty. Good looking to boot.

For example, in the past year one of these men physically injured himself, stepped down from a position of authority in his work life, struggled with a health issue, broke up with a dear romantic partner, and then helped a friend die. And, today, he says, “I feel a connection, depth and calmness that I’ve never felt before.”

When I wrote, “The faster you run the longer it takes to get there,” the “there” I was talking about is where this man has gotten to—a deep level of connection and calmness within himself.

He told me about a hike he just went on with his teenage daughter. It sounded beautiful, both in terms of the sights they saw, and also in terms of the insights they shared. Imagine a forty-year-old man sharing a weekend with his teenage daughter, sleeping under the Milky Way, talking about the origins and meaning of life, what makes things sacred, and pondering “why can’t people just get along.”

At the end of their weekend together this dad said to his daughter that he hoped they would return to the very same spot next year, but he also said, “a lot can happen in a year and we might never come back here together.” His daughter said she was pretty sure that they’d make it back next year, which is a very healthy way for a teenager to view the world—with hope.

But it was the dad’s acknowledgement of uncertainty and impermanence that impressed me (“we might never come back here together”). No pretense. And that’s one way that I measure his personal growth, there is no pretense in his life.

Ironically, when I stop pretending, stop hiding my fears—and instead I face them, which means facing myself—that’s when my anxiety quiets down. This may seem counter-intuitive, but it works. When I face my fears and address the incongruities in my life, I’m taking control. I may not immediately experience less anxiety, but soon after acknowledging where I’m at and what I have to do—my anxiety diminishes.

The other man I was working with this week—the younger one—was attempting to deal with his fear of failure. To quiet this fear he found a spiritual teacher who put forth a philosophy that “there is no failing.” The teacher said, “you will do your best and if you accomplish less than you hoped for you will come back in another lifetime and finish whatever you need to finish.” My client found this comforting, but the issue didn’t seem resolved.

I shared my philosophy which is that I’m not looking to find a way around the human condition. Instead, I embrace the human condition, with all its fears—fear of failure, being alone, not good enough, growing old, dying. Doing this helps me work with people who are wrestling with all these, and other, fears. I wrestle with my own fears on a regular basis. And my goal isn’t to get rid of them, my goal is to conduct myself well (maturely) while wrestling.

My client responded to me by saying that he saw how living with this level of acceptance would give him more time and energy to work on whatever was immediately in front of him. As he began to embrace his own fears he liberated himself. He slowed down. He stopped trying to get from where he was to where he thought he should be. That doesn’t mean he stopped making progress, actually, his progress accelerated.

He slowed down and was immediately closer to himself.

And both of these guys are Live Conscious graduates. I feel like maybe we should start a dating service — “Live Conscious Graduates Available”