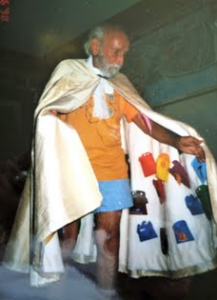 Who should read this article?

Not everyone. This is written for people who are truly curious about the process of personal growth and development, and for people who want to live the good life, an abundant life—a life that is, as my friend Dada says, “an absolute gas.”

The work that we now call Live Conscious and Perception Language, comes directly from our mentors, John and Joyce Weir. We studied with the Weirs for several years before being encouraged by John and Joyce to start offering retreats—also known as “labs”—just as the Weirs had been doing for forty years.

The Weirs referred to their work as “Percept,” which comes from the word perception. In 2013, we rebranded and began referring to this work—the same body of work the Weirs shared—as Live Conscious, and we now refer to the language as Perception Language.

The following article was written by a member of our community, a man now entering his elder years who had the remarkable good fortune to attend his first Weir lab when he was in his twenties. He attended another Weir lab a few years later. And then a gap of about 30 years before he reconnected with Live Conscious. The work he did with the Weirs, and has continued to do throughout his entire adult life, has been so profound that he has been examining how this is so different than other approaches to personal growth and development.

In this article Dada shares his thoughts interspersed with comments directly from John Weir about how to live the good life:

that John developed Percept
to “fix problems.” However,
(like everyone else at that time)
this is the way he started out.

“At this time I was having my first group experiences as a part of my internship in clinical psychology. I worked with groups of five to ten “patients” diagnosed as “sick” and given “psychotherapy” by the group “therapist” who was usually a psychiatrist, occasionally a psychologist. These were called “group therapy” groups and the goal was to “make the patient well.”

His focus then evolved

to investigate “group process”
where an individual
could discover
how his behavior
would function in a group setting.

“It was at this time that I began to learn about “T groups” and laboratory education. These were groups of eight to fourteen “normal” adults experimenting with an exciting new way of learning about human relations and collaborating in the study of group processes with the aid of professional educators (teachers, professors, scientific researchers). The leader’s (trainer’s) task was to help the members learn about group structure and process and their effects on individual and group behavior. People met around a large table and discussed whatever they chose, pausing frequently to identify the emerging interpersonal and social processes. The educational goal was to increase the member’s awareness of group processes, his skills in group membership, and his ability to give and receive personal feedback. Participants in these “Human Relations Laboratories” were mostly “newcomers” who had not been in a T group before.”

His relationship with Carl Rogers

then facilitated his realization
of the importance
of “individual responsibility.”

“In the late 1950s my earlier acquaintance with Carl Rogers developed into a deeper friendship. He had always astonished me with the ease and intensity with which he could give me his full attention, but now I experienced my autonomy, my personhood through him in a new way. His theory and application of NonDirective Counseling took on a new meaning and importance for me. I see now that, for me, I began to develop a new concept of individual responsibility.”

John then began to move away

from “talk therapy”
to experimenting with movement
and other modalities
of human expression
and discovery:
hence the Lab Experiment.

“In the early 1960s I became dissatisfied with talking as the only mode of communication. It was too removed from behavior. It was easy to dilute or distort or obscure the meaning or the intention of the speaker. It became clear to me that verbal expression and exchanges were, in a sense, behavior substitutes. I wanted to work more directly with behavior. In my first experiment in this direction, when one group member said to another, “I’d like to know you better,” I suggested he get out of his chair and say this to the other persons without words. They met in the middle of the group and expressed feelings with a glance, then a handclasp, then a hug, and finally a long, searching look into each other’s eyes. It was evident to everyone that a thousand words had been spoken with clarity in the two minutes this exchange required.”

He then began to look for

“I excited myself with a fantasy of how productive a group could be if it devoted much of its energy to this kind of exchange. I began to experiment with very simple nonverbal interventions. I did away with the table, heightened the emphasis on personal feedback, and switched theory input from formal presentations in general sessions to timely and relevant “lecturettes” during the T group sessions. To the previous goals were added encouragement to try new behavior, and efforts to increase the long-term effects of the laboratory learnings.”

to collaborate with Joyce,
using her experience
with “expressive dance, Yoga,
dance therapy,
group psychotherapy,
and the fine arts,”
to find even more ways
to experiment with
and experience oneself.

“We replaced much of the conventional T group verbal exchange with nonverbal and physical encounters, and increased the attention given to physiological and symbolic processes. We removed all furniture and began to work in an empty room, using cushions for the sit-down periods. We introduced the use of lab pseudonyms, improvisations, finger painting, clay modeling, and behavioral prescriptions. We designed sessions in sensory awareness, body movement, and nonverbal activities. To the training goals we added increased sensory awareness, behavioral spontaneity, and self-control.”

But I think
there are very few programs
designed to help an individual
live “the Good Life,”
a happy, satisfying, interesting,
energetic way
of being in the world,
and of understanding
and discovering oneself.

“[As part of] our strategy to help participants make this journey we provide them with theories and with as many opportunities, techniques, and strategies as we can devise for them to experience and understand this differentiation process during and after the laboratory, and to acquaint them with various resources, internal and external, that are available for their continuing differentiation.”

“Our basic objective is to help them learn how to grow themselves.”

“A goal that seems identical with the nature of organismic development, that is to enable each person to travel toward his own personal distinction, to become more fully differentiated into his unique individuality.
This is our Laboratory
in Self- Differentiation.”

In this regard the Lab

could be presented
not as “fixing” someone
who is “sick”
and has “problems,”
but rather as a place
where one might go
to explore and discover oneself
in a new, more vibrant,
interesting way.

And (dare I add)
a place where one might
have “fun” doing it.

Doing oneself in a way
that is different from the “fun”
of sliding down the World’s
Most Monster Water Slide,
eating too much,
drinking too much alcohol,
or killing oneself
with the latest Fitness Program
at the Luxury Spa.

Of course, one would have to
invest some time and money
to come to a Lab.

(How much does it cost
to “attend” an all-inclusive
Cruise to the Bahamas?)

One would have to take on
some effort, risk,
and personal responsibility.

(How much personal gumption
does one have to invest
to attend the Outrageous
Rock Climbing Adventure
in Peru?)

Indeed, how much does it cost
to go to New York for a week,
or to attend the Super Bowl
for a long weekend?

“Again, I am reminded that all experience can be, and usually is, growth producing. Only sensory isolation, awareness-dulling, and inactivity are anti-life and lead to a living death.”

from the Lab Experience
can be enormously rich,
satisfying, effective, energizing,
and lasting.

“Currently, we see that the ultimate biological function of personal growth is to enable one to develop the personal qualities, skills, and the life style for which he has the potential. Self-management enables one to do so in a conscious program of reaching for ever higher levels of maturity or individuation. This is done through the resolution of parental transferences whereby the participants discovers their unique identities, free themselves from dependence and counter-dependence on parental images, embrace their existential aloneness, and accept sole responsibility for the management of their lives.”

And it’s Fun too!

"Dada" is a member of the Reology community who originally learned—directly from John and Joyce Weir—how to live "the good life." He has actively practiced for several decades what he learned from the Weirs, which is how using Percept/ReSpeak allows one to create an abundant and rich life.
View all posts by Dada →

Up Against The Glass
Don’t Waste Your Life