By S. Katharine Rivers on October 25, 2013 in Personal Growth 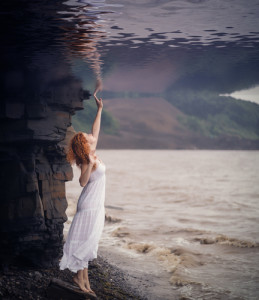 When we live a more integrated life we experience greater equanimity, harmony and balance.

So the question is “how do we integrate ourselves?”

We talked about this at the last Live Conscious Retreat or “Lab” as we call them. What stood out for me was a metaphor called the “River of Integration.” The River of Integration paints a picture in which the left bank of the river represents the extreme of rigidity and resistance to change, while the right bank represents the extreme of chaos and feeling overwhelmed.  And in the middle of the river—that’s where we flow in acceptance, presence and love.

If we come from the rigid side or left bank of the river, we tend to be controlling, obsessive, disconnected from our feelings, overly attached to our beliefs and as a result, defensive. If we spend more time on the chaotic bank of the river, then we are probably more scattered, overly sensitive, easily overwhelmed and more easily re-stimulated.  Living in either extreme is problematic and challenging.

The solution to living in either extreme is awareness and acceptance followed by integration. We begin with awareness of aspects of ourselves that are not integrated, and only after we accept these aspects, or parts, or behaviors can we integrate them.

For the last year I have been working closely with Jake and Hannah, the founders of Live Conscious.  One of the main focuses of my work with them has been to become aware of and accept all the different parts of myself. Because of my history, one of the ways I coped with growing up was to separate myself or compartmentalize aspects of myself that were not acceptable to the adults in my life when I was a child.

Like many of us I was not allowed to show my anger. Nor was I permitted to be sad or depressed.

Children were expected to be seen and not heard, be cheerful or be silent. The fundamental message was keep your head down and don’t rock the boat.

As a result of these messages I learned quickly to deny, repress and hide parts of myself while growing up, only to have them erupt in my adolescence. In my teenage years I became rebellious and outspoken and left home at an early age. I spent most of my youth bouncing between both extremes or banks of the river.

The first step of my healing began with awareness and acceptance. I admitted to myself that I was struggling and stopped denying that I was having a hard time. I stopped trying to pretend I was “fine” and decided I would treat this stage of healing as a process of discovery.

What I found in being honest with myself was the grace to move forward.

And in that grace I found patience and a sense of curiosity. Who were these parts of me I had been hiding since childhood? How would I be if I allowed them out in the open? What would they say if I allowed them to speak?

The first step was noticing that when I overreacted in any situation it meant that a hidden part of me was activated.

I began to notice that sometimes the smallest annoyance would trigger feelings of real anger. Or, I would watch a sad movie and be consumed with sorrow and grief. I began to understand that when my feelings were out of proportion to the situation, I was dealing with a repressed part of me. When this happened I made every effort to allow that part of me to explore whatever feeling had arisen.

I did this with integrity and intention. I allowed the angry part of me to express her anger in a safe environment, I didn’t vent at work or take it out on a stranger. I allowed my depressed part to feel miserable for a specific amount of time, a day, half a day, an hour, 15 minutes, 1 minute. I let the tears flow when I was home alone and had the privacy I needed to fully collapse into my sadness and then took a shower and got back to my life.

I chose to embrace these parts of me in a mature and responsible manner. I challenged myself to work with myself as I would a client –with integrity, boundaries, compassion, and honesty. I didn’t overwhelm or indulge myself—I set limits and expectations and the results were extraordinary.

The second step involved giving the hidden parts of myself time and attention.

When I felt frustrated and wanted to rush I slowed down. I breathed deeply and felt what frustration felt like in my body. Where did it live, what sensations accompanied the feeling? I ceased judging the parts of myself and just let them be. I acknowledged that I had stuffed many feelings as a kid and didn’t expect a quick fix. I decided to proceed as if I had all the time in the world and I practiced sitting still. When I slowed myself down I learned to cultivate compassion for myself regardless of what I was feeling.

The third step was giving expression to whatever I felt.

I gave each of my hidden parts a voice and allowed them to say and feel whatever had been denied them in the past. I wrote, I painted, I sang and I danced. I worked out and I sweated, I wept and I cursed and when I was sated I rested. And I did this until I felt empty. I arrived at a point inside myself where the stories stopped. I found myself no longer needing to talk about the past and what had happened. I felt empty of “then” but filled with “now.”

The fourth step is where I develop my mature voice.

To fully integrate the different parts of myself, it wasn’t enough just to allow each part to express itself; they needed to express themselves appropriately.

In the process of acknowledging and embracing all of me I discover that I need my anger, my sadness and my depression. They are part of what makes me, me. They are as important as my happiness, my joy and my compassion. I learn to express my emotions, to embrace all parts of me without overwhelming myself and without living on either of the extreme banks of the River of Integration. As I am no longer living in the past I can respond consciously and appropriately to the impact of the world.

I’ve found that the process of integration is ongoing for me and I discover parts of myself in a myriad of ways. Because I’ve developed compassion for myself and treat myself with respect and kindness, I find I delight in working with all me. I had a dream recently that illustrates one way my parts reveal themselves and how I have learned to work with them to bring myself to deeper integration.

In the dream three women were attacking me. It felt like a prison movie. Three angry, controlling, older women were chasing and attacking a younger part of me. In the dream, I fought them off but I knew I was going to lose. Eventually I escaped and ran away, and then I woke up.

I wrote the dream down and then I translated it into Perception Language, which is the language of Live Conscious. When I use Perception Language I take full responsibility for myself– my actions, my feelings and my thoughts. In my translation I discovered that the three women attacking me were parts of myself that I haven’t integrated fully and they were based on faulty beliefs about myself. Beliefs that were keeping me stuck in the victim role.

I was raised by an angry woman; a woman who lived her life believing she was a victim. Her definition of herself included the idea that because she was a woman she was automatically a victim. In my personal work I have come to the conclusion that one of my core beliefs is that as a woman, I too am a victim

As an adult I have a choice as to how I define myself. I create my identity by how I think about myself and what actions I take.

With the help of Perception Language and the River of Integration I learn to re-create myself by taking responsibility for myself.

As I listened to that younger part of me I realized I’ve changed what I believe about myself.  I no longer believe I am a victim, or that being a woman makes me weak or powerless. I’ve created new beliefs for myself, I believe I am compassionate and loving, powerful and beautiful and I believe I am fluid and evolving to a deeper union within myself.

With the help of Perception Language and the tools I acquire by Living Consciously, I continue to practice the art of integration. I live in a kinder and more gentle world today because I am connected with myself and I live in the moment. As a result of integrating myself I don’t have parts of me that are living in the past. I don’t spend countless hours thinking about how “they done me wrong.”

I have embraced, nurtured, given voice to and matured my inner children and I live today, in the present. NOW is a powerful place to live.

S. Katharine Rivers is a new contributor to our Reology website. We look forward to sharing more of her blog posts, articles, and short stories in the weeks to come. Katharine is a lover and explorer of the inner world. A long time student of life, she questions everything and seeks joy in the moment. She says, "Life is a series of moments and anything is possible in the NOW."
View all posts by S. Katharine Rivers →