By Jake Eagle on July 6, 2012 in Communicating, Relationships 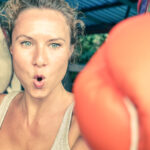 There are two fundamental reasons why we get defensive. If we understand these reasons—with a little bit of effort—we can stop being defensive. Defending ourselves when we really don’t need to is one of the last vestiges of immaturity.

#1—We defend ourselves from certain “truths”

I’m a tall, thin guy. If you call me fat, you just won’t get a rise out of me. It doesn’t resonate anywhere in me. For you to get a rise out of me, there needs to be something in what you’re saying that I don’t want to hear BECAUSE to some degree I think it’s true.

When I used to say to my wife, Hannah, that I thought she was jealous, she’d get defensive and justify why she was acting the way she was. My comment hit on a nerve, because she was actually jealous. Now, if I were to mention something to her about being jealous, she’d just say, “Yup, I do have that tendency to get jealous.” She no longer gets defensive because she isn’t trying to avoid seeing something about herself.

The solution is easy

#2—The other reason we get defensive

The second reason we get defensive is because someone who knows us well holds a negative expectation of us. This is different than being criticized for something we’ve already done. This is about getting defensive when people project something negative about us into the future.

I recently had an experience with a long time friend who said that he thought I would take advantage of him if we partnered up on a business deal. He was projecting that I would treat him unfairly—holding a negative expectation about me.

What to do when others hold a negative view of us

First, determine if you are responding to something that you believe is likely to be true about you. So, in my case I need to ask myself if I think that there is any likelihood that I would take advantage of my friend. If I think this is likely, then I need to acknowledge that.

But, if I truly don’t believe there is any truth in what the other person is saying, then I go to the next step.

I check in with the person and ask them how they arrived at their opinion. I try to remain curious. I ask them if it really makes sense, given our history, that they hold me in this negative light. This allows them to correct themselves if they were just being inaccurate or misspeaking. But if they weren’t misspeaking and they really believe what they are saying about me, then I need to determine if this is their issue or mine.

For example, as I said earlier, Hannah was very jealous when I met her. She didn’t trust me, but after a while she made clear to me that this was her issue; at that time in her life she didn’t trust any men. I had to accept this if I wanted to be with her. She did project negative expectations onto me, saying things like, “I’m not comfortable with you having lunch with other women unless I’m with you.” Because Hannah took responsibility for this issue, I was able to accept this as part of our dynamic and I hoped it would change with time, which it has.

If the latter is true—they see you in a negative light—then there is one more thing to try. Ask the other person, “What, if anything, can I do to remedy the situation?” This may lead to a constructive solution, or it may become clear that there is nothing you can do, or are willing to do—in which case you need to decide if you can continue relating with someone who holds a negative view of you.

Maybe you can. It depends on how big the issue is. If you have a great relationship, but there is one small thing this person doesn’t like about you, that’s not necessarily a deal breaker. But if the other person is questioning something fundamental, like your integrity or honesty, it may not be good for you to keep relating with them.

Good Love Making — how’s your sex life?
Why Do We Hold Back?

2 Responses to How To Stop Being Defensive