By Jake Eagle on December 2, 2011 in Individuating 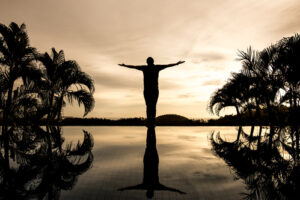 This post explores how to individuate by taking the second step in the three step process. In an earlier post I wrote generally about the individuation process. I identified three stages:

I’ve written about declaring, and now I want to address the next step, separating.

How To Individuate: Step Two

To separate means to form a distinct boundary between two people. Whether or not we need to separate physically, we certainly need to detach or disconnect from the other person’s emotional responses. We may also need to do things such as divide our finances as a way to create clearer boundaries. And we may need to divide responsibilities as a way to reestablish who’s responsible for what.

Ultimately, the purpose in separating is to more clearly see yourself, which helps you take full responsibility for yourself and for your wellbeing. It is during this stage of separating that you begin to recognize the ways you were dependent on or enmeshed with another person. Maybe you were dependent on the other person to motivate you, or soothe you, or to distract you from your problems. What do you do when this person no longer plays that role in your life?

You learn to take responsibility to motivate yourself, to soothe yourself, and to recognize that you were using the other person to distract yourself. You may now find another source of distraction, or preferably you can realize that you are the one who is distracting yourself, then figure out why and decide what you want to do about this. As we individuate, there is no one to blame for our problems.

There are probably some needs you have which you will not be able to satisfy. Maybe you can’t soothe yourself, or not as well as the other person soothed you. This is part of the process of separation, recognizing which of your needs you can meet and which of your needs may go unfulfilled, because some of them will.

The process of separating serves the purpose of allowing you to experience your independence. It may require physical separation from the person you are individuating from, especially if that person is your parent. Or, if physical separation isn’t realistic, for example, maybe it’s your partner who you are individuating from, then you want to focus on defining healthy emotional boundaries and living according to them. If physical separation is possible, realize that it alone is not sufficient; the real work is in establishing and managing your emotional boundaries.

But, remember, you are separating. How to individuate at this stage, is not to put enormous energy into figuring out new agreements and managing boundaries. Such negotiations mostly occur during the next stage, the stage of reconnecting. For now, the point is to disconnect. You may need to manage the flow of communication between you and the other person, limiting topics and the amount of time for conversations. You probably need to establish appropriate ways to communicate given that you are trying to limit your interactions.

Here are some examples of people talking about the separation stage of individuating:

“I haven’t lived with my parents for years, but I called them every week. I always asked about them, but they never asked about me. Or, if they did, it was because they wanted to tell me what I should be doing in some area of my life. I got sick of it, so I told my parents that if they wanted to know how I was they should call me. I told them I was going to stop calling them for a while. And I did. And they never called me. This caused me to rethink my relationship with them. I struggled to accept that my parents didn’t reach out to me, but only after experiencing this did I begin to understand myself much better. Some day I will reach out to my parents, but not until their response is less important to me.”

“My husband and I used to treat each other poorly. We weren’t abusive, but we’d interrupt each other all the time. We’d walk out of the room when the other person was talking. We’d slam doors, mostly me, not him. As I worked to become more mature I decided I didn’t want to behave in these ways. I decided to work on myself, and I specifically didn’t include my husband. I wanted to make certain changes and they were completely independent of him. I told him what I was planning to do, but I didn’t include him in my process. As soon as I made the decision to do this for myself, I actually started to treat him better. But that wasn’t the end; it was just the beginning of my process. ”

Finally, there is the question, “For how long do I need to separate?” Of course this varies depending on the circumstances, but it needs to be long enough for you to encounter yourself, work through your challenges, and no longer victimize yourself with the other person or be overly controlling of the other person. One test is to notice if you are still highly reactive to the person you have individuated from, if so, you may need more time apart.

But, once you are not reactive, you may be able to move to step three: click here to learn the third step, which is “reconnecting.”

How To Individuate | Step One
Who Is Responsible for Your Feelings? | Huffington Post