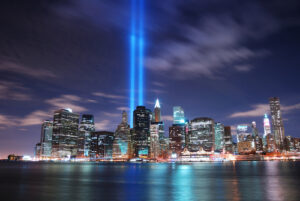 Today is the 9/11 anniversary of the attack on America. Did we change ourselves as a result of the attack? We came together for a short while, unified and compassionate—but did it last? Did we use the attack to become better? Nietsche said, “Anything that does not kill me will make me stronger.” Are we stronger as people, as a nation?

Becoming World-Centric instead of Ego or Ethno-Centric

The next step is a world-centric (all of us) orientation. With this orientation all voices are heard, differences are respected and compromises are reached. Not only did we fail to take this step after 9/11, but within our own country we have slid backwards into partisan divisions, each side attached to its own ethno-centric agenda.

Maybe we can use this tenth 9/11 anniversary to become stronger, not just as individuals, but also as a diverse group of people working together to create a better and more just world.

What Should I Expect From My Relationship?
What is Great Therapy?

"We suffer from the illusion that the faster we run, the more likely we are to grasp happiness. The truth is that the velocity necessary for success rarely exceeds the rate of reflection."— Sam Keen