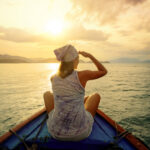 Woman traveling by boat at sunset among the islands.

“How To Find A Good Man,” is a continuation from an earlier blog, “Why can’t I find a good man,” in which I suggest that many women attempt to force relationships to work with the wrong men. It’s as if these women try too hard. Ironically, if they are successful, they end up in a relationship in which they have to keep working hard.

How to find a good man—or partner—requires three things:

Yes, intolerance! Think of it like this, there are three stages to romantic relationships: dating, relating, and mating (mating being the equivalent of marriage). During the first stage—dating—you want to be intolerant of things that don’t work for you. This doesn’t mean you need to be rude or disrespectful, just firm. If your date picks you up late—and that really doesn’t work for you—let him know. If he does it again, tell him that if it happens one more time he’s out. Apply the three strikes and you’re out rule…

What a lot of people do early on in relationships is negotiate about everything, trying to be understanding, and compromising. These efforts may be appropriate once you get to the mating stage, but they are not appropriate in the dating stage. The dating stage should be easy. It’s a time to have fun, explore how your rhythms sync up, and figure out if you’ve got good chemistry—which can be pretty well determined from first base.

If you’re too tolerant during the dating stage you’re sending a signal that you are willing to tolerate less than what you really want. You’re setting the bar low and you’ll end up with a partner who can’t jump very high.

The second key to attracting a good man—or partner—is to be the person you want to attract. If you say you want a partner who is mature, reliable, financially stable and able to communicate well—you need to be that person. Relationships work best when like attracts like. If you find someone to compensate for your limitations, it’s too easy to become dependent on that person. More often than not such dependency leads to problems.

The third key to attracting a good man or partner is to show up and say, “This is me.” Don’t hold back or only put forth your best self. This is a common, but flawed strategy—waiting until you are invested in the relationship before showing him or telling him whatever it is that you think he may not want to see or hear. Put yourself out there before you are deeply invested. If the other person doesn’t respond well—move on, you’ve got nothing to lose.

I recently worked with a client, a man, whose female partner of two months asked, “Are you in love with me?” The man made himself nervous with her question. Out of fear that she would disapprove of his answer—because he couldn’t say “yes”—he sidestepped her question, leaving it unanswered. He missed an opportunity to show up, and instead he justified (to himself) his lack of forthrightness as a way to “avoid conflict and hurt feelings.” But by not showing up, he missed the opportunity to clarify their relationship. He acted as if there was a “right” answer and a “wrong” answer, and he didn’t want to be wrong.

But had he told her the truth he would have been showing her that he was honest and trustworthy. He would have been moving toward her even though he couldn’t tell her he was in love with her. Instead, he deceived her.

From a Live Conscious point of view, honesty delivered kindly is more respectful than protecting someone from the truth.

I’ve enjoyed almost twenty years of marriage. Our experience of being a couple has been simple and delightful. Neither of us tolerated any baloney when we first got together. We both try to be the kind of person we want to be with. And we’re both committed to showing up.

I’m convinced that if we honestly show up, the answers to our questions will become obvious, and we’ll know how to proceed. I realize that sometimes we fear the answers, but by avoiding them—which is really avoiding ourselves—we waste precious time.

When we don’t show up, or we aren’t honest, our relationships drift into the territory of hallucinations. The result is misunderstandings, power struggles, resentment and a lack of true intimacy.

You may challenge yourself with my formula for how to find a good man or how to attract a good partner, but I assure you that this works. If this approach feels difficult, that’s just because it’s unfamiliar. But ask yourself how well your strategy—the one you’ve relied on for years—is working. If it worked well you wouldn’t still be searching for a good partner. So, although my approach may feel difficult at first, if you do this—living, partnering, and relating will be easier.

The other thing you can do, which will help you be more honest with your partner, is learn Perception Language.  Come join us at one of our Live Conscious Retreats. Only by immersing yourself in this process are you likely to truly learn this new way of speaking to yourself and other people.

Why Can’t I Find A Good Man?
A National Strategic Narrative by Mr. Y serves as a great example for a personal narrative

13 Responses to How To Find A Good Man