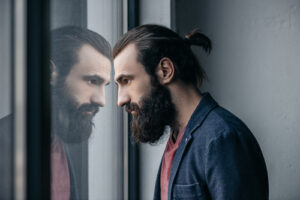 I’ll tell you a secret about therapists. From time to time we wonder if people, even ourselves, can truly change our core beliefs.

We witness a 54-year-old woman pick the same “wrong guy” she has picked five times before. She’s smart, conscious, been in therapy for years—does she not learn? We witness a 42-year-old man continue to make irresponsible choices, even after he has identified that he must change his behaviors. We witness a 61-year-old man continue to treat other people disrespectfully, just the way his father treated him, even though he says, “the most important thing to me is to not be like my father.” We witness a 68-year-old woman hold herself back, after years of therapy in which the goal was to “become more open and expressive.”

The reason I mention the ages of these people is to point out that none of them are inexperienced toddlers of personal growth. These people have worked on themselves for years, applying their intelligence and deep desire to live “better” lives.

The answer is yes. I have proof, both in my own life, which is reassuring, and just yesterday I witnessed core beliefs being deconstructed and reconstructed in the most meaningful way. This guy is 46-years-old. Like many of my clients he is high functioning; he is a self-aware man who has worked on his personal growth for most of his adult life. He has made progress along the way, but an indefinable part of him never changed. Something was frozen. Yesterday he thawed himself out, transforming ice (rigidity) to water (flowing).

What made the transformation possible? First, he needed to see the ways in which he compensated for those parts of himself that he thought were “bad.” In his case, he could only do this with the help of a loving woman, because with her he felt safe. The safety allowed his judgments to melt into curiosity. Later on, he needed to extricate himself from her, because although she was helpful, she withheld from him—and he wanted more. By leaving her he exercised a new belief, “I deserve more.” This was the first time he didn’t fight about what he deserved, he didn’t accept less than he believed he deserved, he simply said, “I deserve more,” and congruently acted on his new belief.

Could it have happened ten years earlier? I don’t think so, not in his case. Ten years earlier he had so much vitality that he didn’t tire himself with the “fight;” he defined himself with the “fight.” He was too invested in proving that he wasn’t “bad.” Only after accepting parts of himself, which he previously denied—the “bad” parts—was he able to stop compensating for them.

Core beliefs can change. I’m continuously searching for ways to help people bring about such change and growth at earlier stages in their journey of personal growth.